Since 2011, I have been seeing coloured orbs floating around. I witness them with open eyes and they float by or just appear in front of my gaze. The orbs are in the 4th dimension and I see them physically as watching a bee fly by.
It mostly happens at home and I assume that it is because my sight is more relaxed, whereas out in traffick my sight would be occupied with the surroundings. I have seen a few whilst sitting in a class room, a few outside in a yard and a few at friends homes. 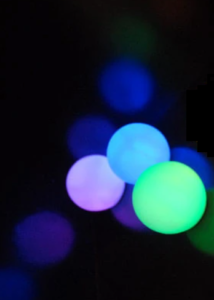 The first one was half pink and half purple molted together. All the orbs have bright colours and glow by themselves. Their size range is usually between the size of a small bouncing ball and the size of a palm. And no, the orbs don’t bounce – they just float in mid air.

The colours are usually somewhere on the spectrum of blue – from electric blue to a royal blue and indigo. They can also show up as pink, lavender, gold, white, dual-coloured with a blue core and a white outer layer. Have also seen a spotted green / purple and three golden orbs floating together on a string up under the ceiling.

The orbs are spirit consciousness and they are the etheric form of someone who is sleeping or doing OBE or it can be ETs, deceased humans, animals, angels etc. They always have a calm and cheerful vibe.

So far I have not caught them on camera, but the image is a good representation of the self-luminescent glow and colours of how the orbs appears to my open eyes.